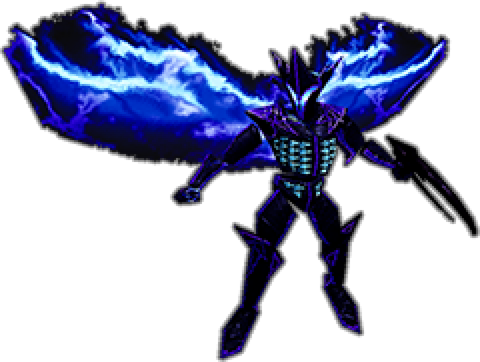 Astral Angels are the uncommon enemies, that are fought mostly in the open or outside areas of the Astral Equinox. They wear spiked helmet, with one horn on each side, and dark blue armor, with light colored ribs on their breastplate, like Deacons. That can signify that they have the similar ranking in the Lunar cult hierarchy. They have two big magical wings, growing from the back of their bodies, and are equipped with two boomerang-like moon shaped weapons. Their durability is also comparable to that of Deacons.

Apart from the most of the ground units, Astral Angels are slower, and prefer to keep their distance, while shooting ranged electric attacks on the Champion, although if they find themselves closer to the Champion, they don't hesitate to fly in the range of melee, and spam their attacks from there. Although these attacks are quite predictable and can be dodged quite easily, it is very hard to do so, when there is a bigger group of them. Because they are flying, Champion should choose weapon with faster projectile speed, since hitting the Angel with weapons like Whispering Edge, that has medium projectile speed can sometimes be tricky. Apart from that, Champion should have no problem dispatching smaller groups of these enemies, as they rarely appear in larger group.