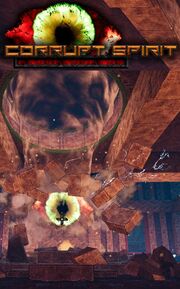 Corrupt spirit and his health bar

Before the fight with the Corrupt Spirit starts, a message "You are being watched" appears on player's screen. The boss only appears if player moves to the center of the arena. Since the boss is very tanky, it is recommended to collect all the available mana pickups around the arena, before doing so. Despite bringing life numerous Golems and Ghosts throughout the whole Sacred path episode, Corrupt Spirit doesn't do such things during the fight with him, instead relies on his telekinetic powers, thanks to which, he can form tornado around himself, and throw boulders on the player. These can reach any part of the arena, so once the fight starts, there is hardly any time to rest, as the Spirit throws the rocks very quickly. He is also trying to predict the player's movements, so the rocks can't be easily sidestepped, as they are predicting player's movements. When the Spirit's HP goes down on one third, he initiates his second phase, where he forms a bigger rock barrier around himself, and throws even more rocks than before. At this phase, you should have your strongest weapons prepared, or you can try to collect legendary soul, that instantly charges your soul mode, and finish the fight quickly, as it becomes very hard to dodge all the flying rocks.