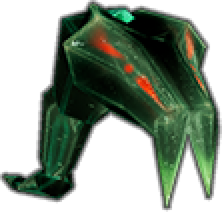 Crystal Snake is the common enemy type encountered by Champion in the Arcane Expanse. Similiarly to Crystal Spiders, Crystal Snakes are artificially created by the mages inhabiting the Arcane Expanse, in order to serve as their pets and servants. Crystal Snakes are, however, slightly more advanced, than the Crystal Spiders, as the crystals, that are creating their body, are carefully shaped, in order to resemble snake as much as possible. They are also much more intelligent, and were imbued with poison magic, that can be seen with their light green glow, when they are using it. Their durability, however, is same, if not lower than that of Crystal Spider's.

Crystal Snakes are not as wild as Crystal Spiders, and so they are trying to keep their distance from Champion, and circling around them, while using their ranged posion spit attacks. Even though the projectiles themselves can be easily dodged, the main danger is coming from the small puddles, they are creating after falling to the ground, that remain active for approximately ten seconds and damage Champion, if stepped on. This becomes annoying especially if there is a bigger group of Crystal Snakes present. Due to the twitchy movement of their body, it's best to aim for the head, which is relatively small, so the best weapon of choice here would be the Azure Orb. However, Crystal Snakes are the enemies with lowest durability in the Arcane Expanse, and so if bigger group of them is present, and thus, making it harder to miss, it's highly recommended to use Celestial Claw, as the Snakes are unable to withstand a direct hit from this weapon, like majority of enemies from Arcane Expanse.