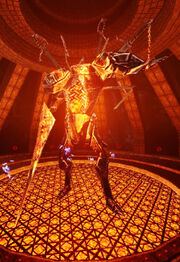 Forgemaster is a boss of The Forges and also the fifth boss in the game. He was possessed by the Evil when it manifested itself in this world, and forced to create weapons and army that would fight for it, in the Forge. He wears the armor made from the toughest metals available in his world, that is enhanced even more by the liquid form of orange energy, coming directly from the center of the Forge. That makes him completely invulnerable, which implies from many weapons stuck in his back, that were unable to kill him, possibly belonging to the original inhabitants of The Forges. Sparks and bursts of orange are coming from the back of the Forgemaster, as he is able to completely control it and manifest it in the form of attack in his sword.

Forgemaster is fought in rather small and narrow corridor, and is always trying to reach the player in melee range, due to his main weapon being sword. Other than that though, he has two types of ranged attacks, that he'll be using for the most of the fight, as the player should do his best not to come into melee range with Forgemaster. First of those are three straight lines of orange energy sent to the player with gaps between each of them. The second attack are five bouncing balls of orange energy, which can be quite tricky to dodge, if they bounce themselves of the wall and don't come in the straight line next to each other, as player must carefully time to pass through when the balls are in the air. As if the dodging of these rather complicated attacks in the small narrow corridor isn't enough, Forgemaster is also the first boss in the game, that cannot be killed by the player's weapons alone. In order to make him vulnerable to damage, the player needs to cover him with liquid turquoise energy first, which will neutralize the orange energy covering his body for a while. That can be done by one of the three switches located in the corridor, which will activate the pipeline with the turquoise energy, as showcased at the start of the level. Another important things are the souls located on the sides of the corridor, that can boost player's soul mode, which will definitely come in handy, and is extrremely effective when used with the ax, as it keeps the Forgemaster locked in a stunned state. (The boss fight can be completed in less than a minute this way). Last but not least, Forgemaster can be briefly staggered by any received damage, whenever he is in vulnerable mode. This can be used to run past him, without putting the player in danger of receiving one of his devastating melee attacks.