"They are much adept in many forms of combat." 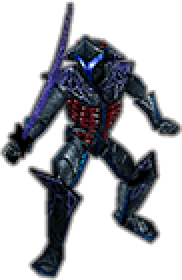 Deacons are the common enemies in the Astral Equinox, and are often found alongside Astral Acolytes. They wear horned helmet through which, their bright blue eyes can be seen and silver armor, with red like ribs on their breastplate. He is equipped with long silver curved sword. They belong to the higher ranks of the Lunar cult than the Astral Acolytes, and as of this, they are also stronger and more durable.

Deacons are basically more advanced versions of the Astral Acolytes, which makes their behavior almost identical. They also run straight to the Champion no matter what. Although apart from the Astral Acolytes, their curved sword allows them to do ranged magical slashes, during which they have to stop running. These slashes, although not exactly slow, can be side stepped, or nullified, if Champion decides to also shoot magical slash from the Whispering Edge. Apart from that, any sort of ranged weapon works fine against them, although Azure Orb might be quite lacking in terms of damage on these guys, and it may take longer to dispatch a bigger group of Deacons while using it.