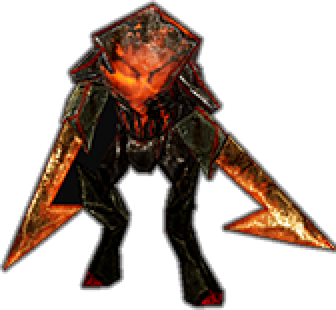 Metal Bomber is the common enemy type encountered by the player in The Forges. As the vast majority of enemies in The Forges, the Metal Bomber isn't living being, but rather robotic creature, that functions thanks to the energy from the Forge. He is basically a walking headless armor made from some of the toughest metals from it's world, resembling sentinels from The Domain of the Sentinels, although being more technologically advanced, which also comes in hand with quite a high durability. He is able to tank a lots of damage from weaker tier weapons. He has detachable spear-like weapons installed in the place of his hands, that glow with orange colored energy.

Metal Bomber can be a very dangerous opponent even if he is alone, due to the weaponry he is equipped with. His detachable spear-like hands function as a very dangerous explosive weapons, that can be shot at long distance, and although they are not the most accurate weapons, the explosion is big enough to make it very hard for the player to dodge all it's damage. The bright side is, that Metal Bombers don't have any melee attack, and are always keeping their distance from the player, so if player is able to dodge their projectiles, they can be ignored long enough to finish off some more prioritized targets in the fight. Even though they are very durable against Azure orb, Whispering Edge or Trident, they can be one-shotted with the Claw, which is also fairly accurate on longer distances. That makes it the best weapon against Metal Bombers, although when out of mana, any other stronger weaponry is good enough to get rid of them.