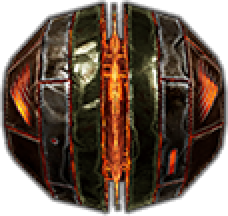 Metal Flier is the common enemy type, encountered by the player in The Forges. They are made of two symmetrical halves connected together, creating oval-like robotic being, that - as the name implies - is able to fly using it's advanced technology. Those halves can spread themselves, revelaing it's core in between, that is constantly producing more ammo to it's saw launcher weapon. Their metal is also tougher than that of medium tier enemies in this world and they are visibly bigger in size. They are powered by the same orange energy as Metal Bombers, which means player can easily spot them by their orange light even in the foggy and dark ares of Ruins of Rust.

Metal Fliers behave not much differently than any other fliers from other worlds. They are however definitely the slowest fliers so far, together with Adult Parasite Fliers. That is however compensated by their durability and firepower. They can shoot their projectiles at decent speed, making the fight with group Metal Fliers hard situation. Their size and speed makes it very apparent, that your primary weapons against them should be the Claw or the Star of Torment. However, due their ability to tank two shots from Claw, when fighting more than two of them, player shouldn't be afraid to use Aeturnum, as it can one shot them all, as dodging the projectiles of five fliers at the same time may be quite troublesome, especially on some tight ledges.