Selenic Stronghold is the first level in Episode 1: Astral Equinox.

An ancient stronghold that lies inside a complex of mountain caves, you must battle your way through to reach the platform that leads to the bastion above.

There are 46 destructible decorations:

Taking the right path to get the gold key, after the bridge and beyond the stairs is a rocky path upwards. Above the first Large Health power-up is a small opening. Up that area is a message that reads "Howdyagethere". You can either use the AERO Cheat or lure a Starlight Defender to that area by pushing it down with their own recoil, then getting hit by several bombs in quick succession to get up there. This does not count towards the MSGS. statistic. 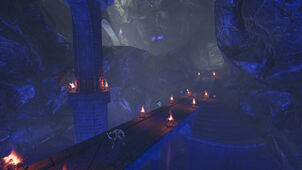