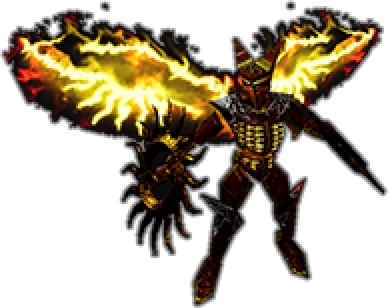 Solar flier is a common enemy type found in the Solar Solstices. Although his armor is shaped similarly to Solar berserkers, he definitely belong to higher class in the Solar cult, simply because he can control magic. His armor is colored in different shades of yellow, and two magic fire-like wings are growing from his back, similarly to Lunar flier, who is Solar flier's counterpart. As with every counterpart, Solar flier also shares the same durability with Lunar flier. He is equipped with two circles, that are shaped to resemble Sun, which help him channel his magic through them.

Solar flier behaves almost same like Lunar flier, with the two differences being Solar flier never approaching player in melee range, and shooting Sun shaped fireball to the player, instead of blue colored electricity bolts. Thus, the same tactic applies, and that is to use some weapons with fast flying projectiles, because it can sometimes be tricky to hit him in the air. That applies especially, in the last level of Solar Solstices, where player is given the ability to fly.