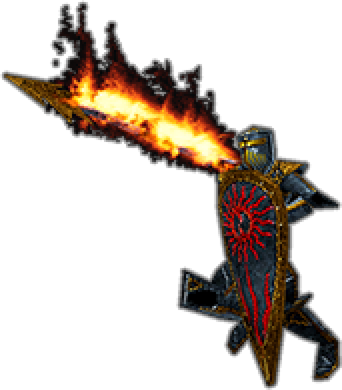 Solar knight is a common enemy type found in the Solar Solstices, often accompanied by Solar berserkers or other knights. In the Lunar cult, he is higher ranked than Solar berserkers, which is signified, by his armor being made from silver and gold material. He carries a shield, with the symbol of the sun, and also a burning javelin. Due to red ribs on his breastplate, it's quite obvious, that Solar knight is Solar counterpart to Lunar knight, even though they are both equipped with fairly different weapons. They also have the same durability, although their shield makes Solar knights harder to kill.

Solar knights are more patient than Solar berserkers, moving in a slow pace, carefully approaching player, while constantly hurling their javelin's at him. If player gets hit by them, he takes damage in three ticks, and javelin remains pinned on players screen, which fairly limits his vision. Although their main power, is their shield, that can reflect any weapon attack, except for Aeturnum, back to the player, although the stronger the weapon is, the lesser the probability of reflecting it's projectile is. Safest beat to deal with these guys would be Whispering edge, as the slash reflected back to the player is similar to the one, created by Lunar knights, and thus, can be nullified by yet another slash. Another option is using Celestial Claw, where the probability of Lunar knight actually deflecting the projectile is very low, and one planet is enough for them to die, however, should they deflect the projectile back, it's force might be very destructive.