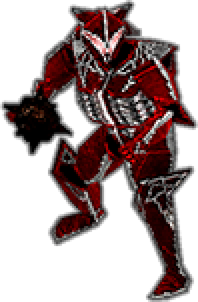 "Heavy Defenders of the astral lands. They throw grenades."

Astral Defenders are the rarest enemy type that can be found in the Astral Equinox. They wear bright red and white spiky armor, that resembles a person without a skin, that has the muscles and bones visible. Fire can be seen burning on their back. Their magic enables them to create grenades, which definitely places them between higher ranked members of the Lunar cult, even though they cannot take much damage, having the same durability as Astral Acolytes.

Astral Defenders are the only enemies from Astral Equinox, that do not walk, run, or fly towards the Champion as their primary objective. They usually spawn somewhere out of the reach of the Champion, and throw grenades from the distance, which not only can hurt the Champion, but they can also destroy specific parts of the environment, making some passages unpassable, and forcing the Champion to find the alternative way. They can be easily dispatched by any weapon, but due to the explosive splash damage from their grenades and also to their positions, which are often hard reachable, it is best to use some accurate ranged weapon. They can also be killed by the grenades of their comrades, but they take no damage from their own mines.