The Scrounge is boss of the second World, Domain of the Sentinels, and also the father of all parasites, that infected this World. Apart from all the parasite types, The Scrounge doesn't have red color, as she is covered in green slimy like substance. Like the other parasites though, she also has bunch of tentacles and eyeballs, and also some red tumors, possibly an eggs full of Hatchling parasites. His origin is unknown, but he may be another evolution stage of Adult parasite, as he is unable to fly, and shape of his tentacles resembles those of Adult parasite. 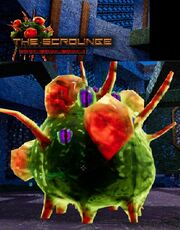 The Scrounge with his health bar

The Scrounge is the first boss, that player faces with full arsenal, and as such, has much larger HP bar than the boss of the previous World, the Moon Guardian. She has two types of attack. First one is jumping around the arena, usually trying to target the player and stomp him, and the second one is unleashing a big swarm of Hatchling parasites, that all try to attack the player. The second attack, although very dangerous, is also an advantage for the player, as every single Hatchling parasite drops small soul, which can help player to charge his soul mode, thanks to which, The Scrounge can be killed very easily.